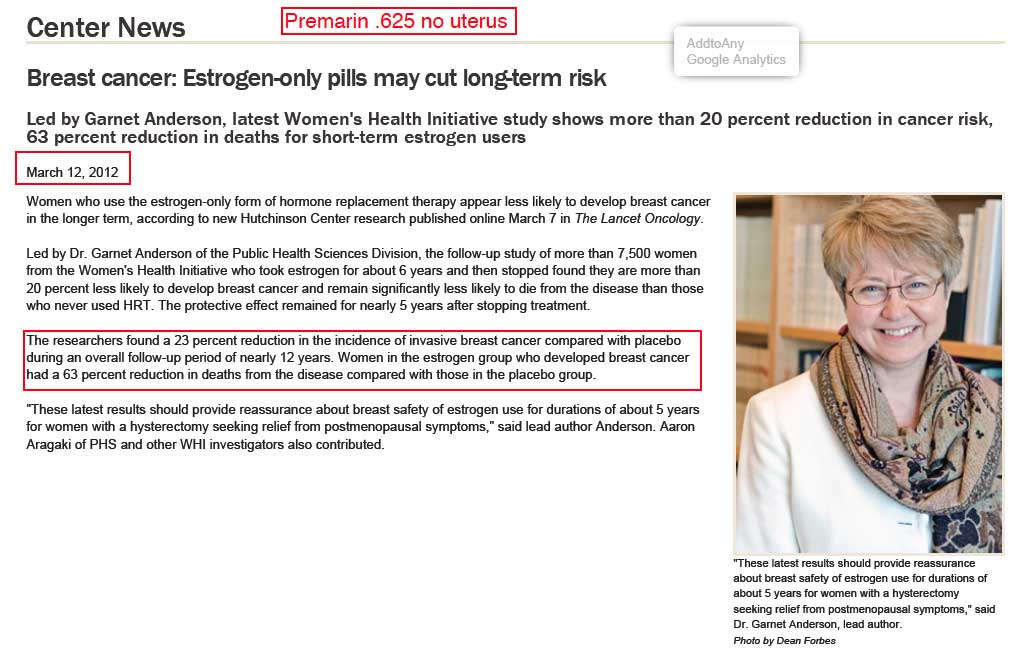 Since 2002, there has been an onslaught of articles and published studies indicating that Estrogen is poison. Since 2004 the FDA has black-boxed labeled all Estrogens as a carcinogen. Now the 12 year followup for the WHI (March, 2012) indicates that women (without a uterus) taking Conjugated ESTROGENS (yes, Premarin!) for 6 years, then stopped and were followed for another 7 years had an overall LOWER RISK OF INVASIVE BREAST CANCER (23% reduction). In fact, those women who got Breast Cancer in the 12 year period had an astonishing 63% REDUCTION IN DEATHS!
See also:
WSJ article "Benefits of Hormone-Replacement Therapy Outweigh Risks, Reviews of Studies Show"
Common Health article " Hormone Replacement Therapy 10 Years Later: Calls For ‘Rational Use’"
UCSF risk factor article http://www.ucsfhealth.org/education/breast_cancer_risk_factors
Breast Cancer discussion http://www.medscape.org/viewarticle/585629
WHI commentary Get informed on menopausal hormone therapy
University of Oregon 2008 Premarin or Prempro lowers breast cancer mortality
University of Orgeon 2002 HRT prior to diagnosis improves Breast Cancer survival 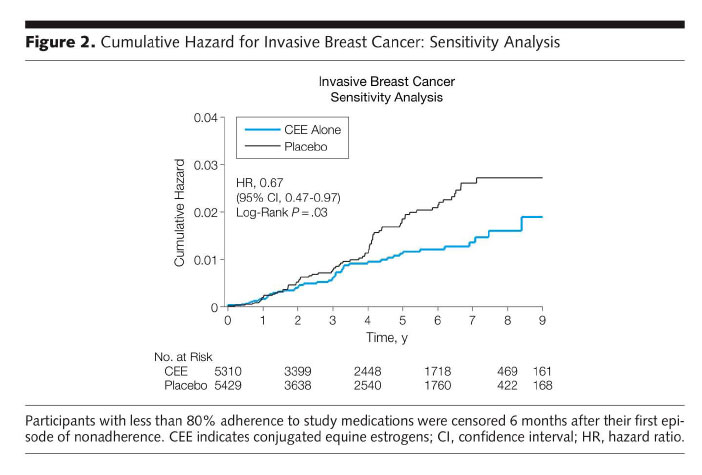 But we already knew that. In 2006 the WHI E-only 9-year followup was published that showed the same thing (blue line below) for the women who actually took the Premarin Estrogen, not just were randomized to the E+P group. The E Premarin Hormone group had a lower Breast Cancer Risk after the 9 year followup.
...source: http://www.fredhutch.org/en/news/center-news/2012/03/anderson-whi-estrogen-only.html

So why still all the fuss about the risk of Estrogen and Breast Cancer? Well it continues to be a moving target. Maybe because of the Estrogen plus Progestin studies that are continually published relative to Invasive Breast Cancer.

First, let's clear up one thing: the WHI studies indicate that when E+P is started in the Menopausal time (before the age of 60), there is NO INCREASE IN DEATHS, OR HEART ATTACKS, taking Premarin plus Provera (Estrogen/Progestin together). In fact, there is a DECREASE over the 7 years of the study for E+P. The information for women >60 in this study just dont apply to this early-start group. 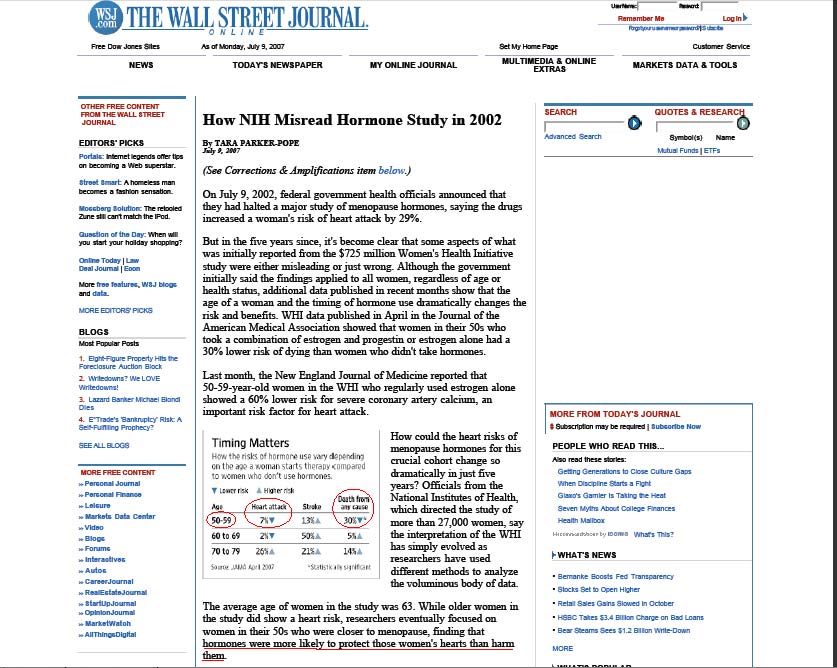 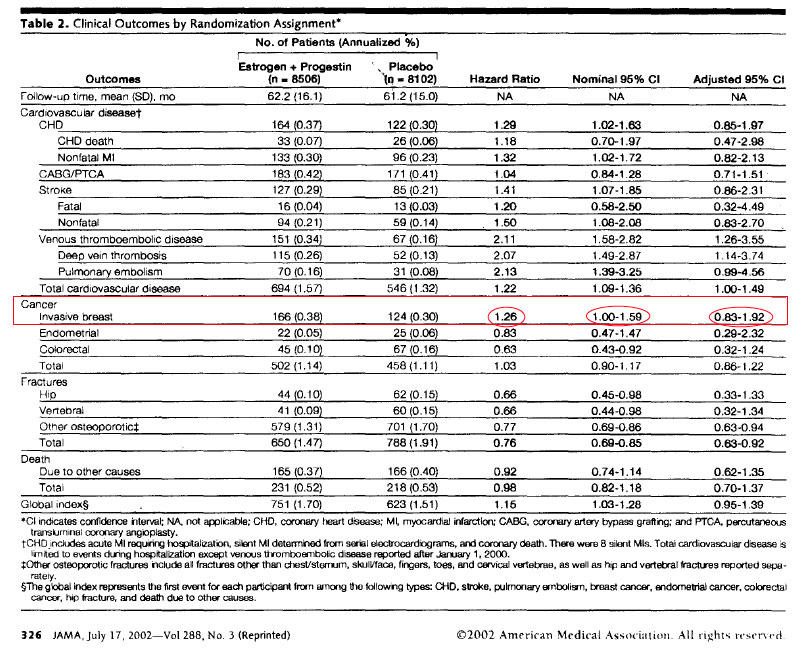 There is also an important issue that is glossed over. The original 2002 JAMA WHI E+P paper actually showed NO STATISTICAL INCREASE IN BREAST CANCER at all. The 1.26 Hazard ratio (26% increase reported) from the paper below shows a 95% range that includes 1.0, no effect. That means, in the errors they had defined, there was NO increase in Invasive Breast Cancer. Period. And, for ranges that include numbers near 1.0 (1.04 or 1.07), the likelyhood is only marginally greater or less than a 95% cutoff and should not be interpreted as black and white yes or no.
Additionally, the significance range for an outcome needs correction when it is just one of multiple outcomes measured. This adjustment for multiple outcomes in the WHI E+P 5year average gives a range of [0.83-1.92] for Breast Cancer. Clearly this is NOT a significant increase for E+P at all, unless you choose to ignore the significance range itself. 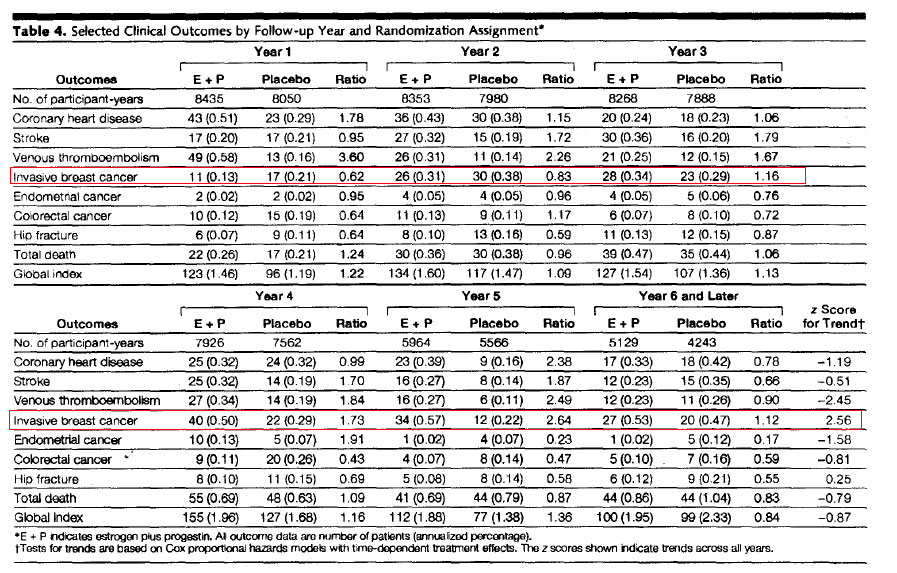 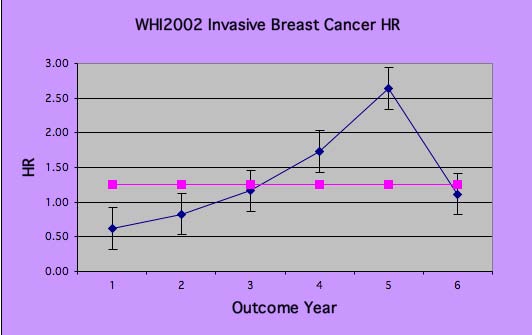 Note also that there is a decreased HR for Invasive Breast Cancer WHI 2002 E+P in years 1&2 (below pink 1.26 average), but then an increase HR in years 4&5 (above pink 1.26 average). This actually invalidates the fundamental Hazard Analysis assumptions. The HR outcome is assumed to be constant over time, so the actual data (in Blue below) cannot be represented by this average for the period (in Red), ie, the HR changes sign.
WHI 2002 E+P
Invasive Breast Cancer
Take a careful look at the other graphs below from the WHI 2006 JAMA E-ONLY 9-year followup. Notice the In Situ graph HR's are identical in the E(Premarin) and Placebos groups, indicating NO INCREASE IN NEW BREAST CANCERS for Premarin E. TOTAL (and INVASIVE as already indicated above) BREAST CANCERS are decreased in the E group. This fits with the explanation that Premarin does NOT induce Breast tumors (In Situ), and actually inhibits the growth of tumors that are present when starting hormones (Invasive). 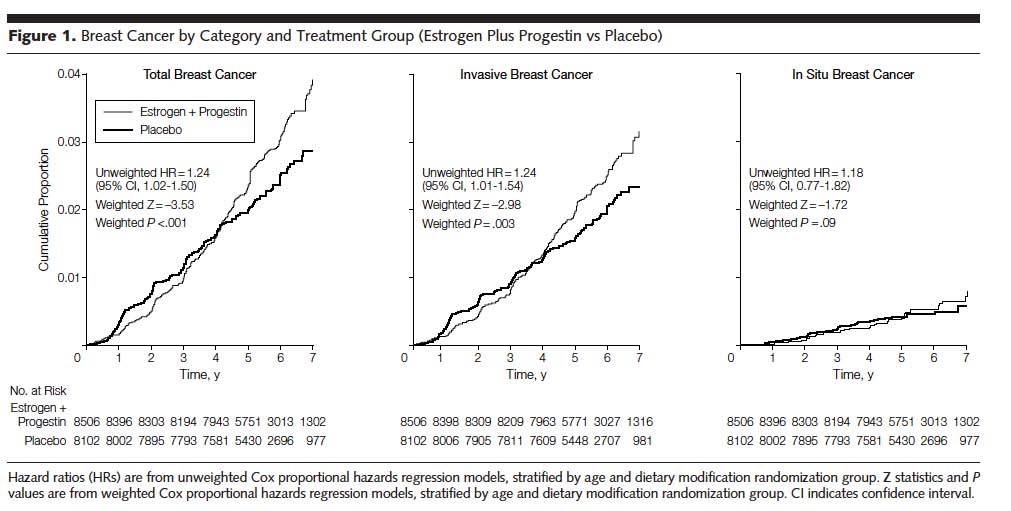 However, an equally plausible explanation, given the totality of the world experience, is that the Estrogen+Progestin simulates existing tumors to grow faster (WHI 2003 Final E+P paper at 7-years Invasive, below center graph). This view has gained popularity since 2002. If the papers' explanation is valid, then an increase in In Situ tumors with E+P would be expected. No effect on new tumors is noted (In Situ, below right graph). It takes time for small tumors to grow and become detectable. If they grow faster, then the HR is bigger (more events/time for a smaller/sooner time).

Additionally, the HR graphs cross. This challenges the statistical significance of the Hazard Analysis approach, so no statistical difference over the entire 7 years (note CI's almost include 1.0 for Total and Invasive).

WHI conducted a chronological Obsevational Study of Premarin and Provera at the same time as the famous "Randomized" study, both ending in 2005. The WHI 2009 NEJM Observational E+P paper really confuses the issue. It is an admirably executed and painstakingly written paper, but a rather intricate regression analysis.

One issue is those having detectable Breast Tumors diagnosed as benign are more likely to drop out when the results were announced. This means that patents at higher risks are no longer in the study.

Their explanation of the observed drop in HR for the E+P hormone group from the study hormone years (1-7) to the post-study/no-hormone years (7-12) is as follows:

A big issue with the WHI E+P group, although randomized to hormone, was its higher risk for Breast Cancer before the study began (not well controlled). Speroff and others have written on this. The regression analysis I have conducted (NAMS 2004 posted on my website) is consistent with this as well, since the regression E+P rate is higher than the Placebo (non-zero) when extrapolated to zero time (it should be the same at time zero).

The 12-year followup to the 2003 paper (2010 JAMA WHI E+P paper) recorded an additional 6 years of no hormones after the 5.6 years of Premarin 0.625mg + Provera 2.5mg. An examination of Figure 3 shows some interesting findings. First, the increased risk with hormones was independent of Age and Gail risk score, and actually lower for the obese women taking hormones! This does not fit with clinical experience. The hormone women were more likely to drink alcohol, a huge risk factor for Breast Cancer.

In addition, the Breast Cancer HR for women who started E+P more than 5 years out of menopause (1.15) or had less than 5 years of prior hormones (1.16) is the same as those who never had HRT (1.16). All the risk appears confined to less hormone exposure, not more. 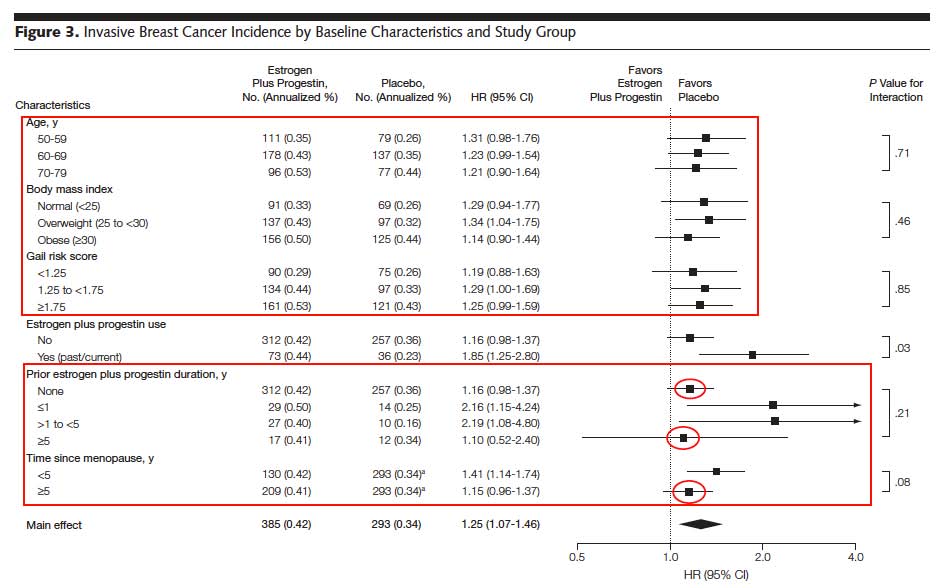 The studies of the effect of hormones is difficult if those effects are dependent on the age you are, the age you started, and the duration of treatment, all which can have conlficting effects. Mortality is a good example. Below is a graph of Deaths by Cause as a function of Age.

The Mortality Rate varies sharply with Age at Death. A woman taking hormones from 40-50 years old is very different from one from 50-60. As well, the previous history will have varying effects depending on the biological effect at that age.

This is why the Global Index Average approach is so problematic. The studies need to be of long duration, but then stratified by age of treatment and outcome, so there is a diminishing return to the "intention-to-treat" approach. The large, multi-center, randomized, "controlled", based on Survival Analysis of rates has major limitations. 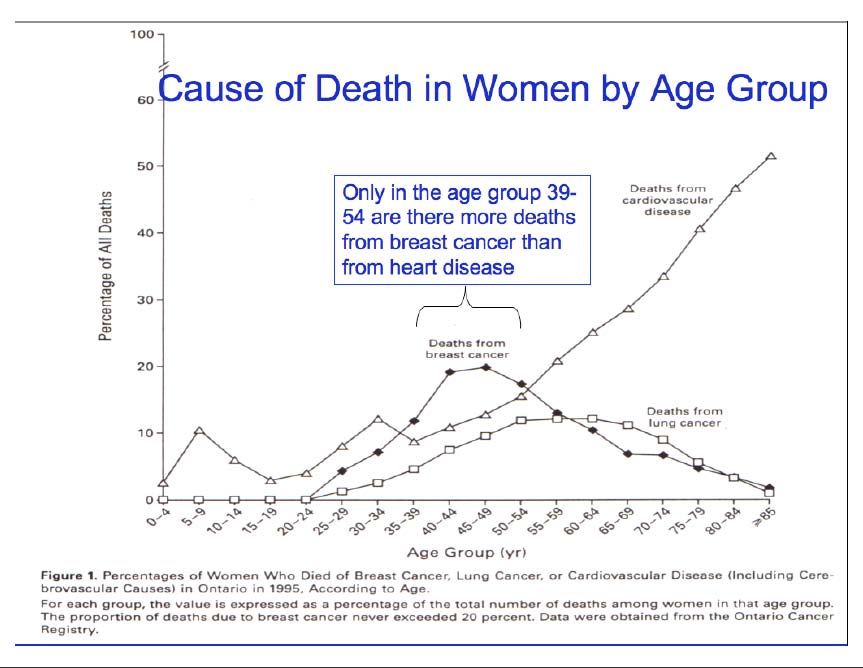 Added August 2014 - More about the Statistics

I have tried to empahsize the limitations of the Hazard Ratio (HR), particularly in evaluating a time-to-event study like the WHI study. This recent assessment below does a nice job of describing this for those so inclined. As well, a rule of thumb is that 500 outcome events are required for statistical significance. Studies that don't reach this level should really be scrutinized.


"We conclude that the hazard ratio cannot be recommended as a general measure of the treatment effect in a randomized controlled trial."

From:
Restricted mean survival time: an alternative to the hazard ratio for the design and analysis of randomized trials with a time-to-event outcome
Patrick Royston* and Mahesh KB Parmar
BMC Medical Research Methodology 2013, 13:152

3) The effects of Estrogens and Progestins on the Breast involve both tissue growth and inhibition of tumor initiation. These effects are mediated by the metabolites of Estrogen, especially 16-OH derivatives, so prior exposure history to hormones will affect findings.
( Estrogen's Role in Cancer - Susan Conova / Hari Bhat)

4) Things are complicated in the Breast by the fact that Provera (in the WHI study) has weak Glucocorticoid stimulation, strong direct Androgenic stimulation (like DHT) with strong indirect Androgenic inhibition (lowers total Testosterone and DHT), and strong Progesterone stimulation in the breast (yes all three).

5) Less Premarin or more Provera may be advantageous. The Conjugated- and Ethynl- vs Estradiol (bio-identical) forms of Estrogen may or may not be better (or safer).

5) Estrogen or Progestin in any form is shown to provide more benefit and lower overall risk, regardless of age. Like any medication, it has to be dosed properly.