Additional plots of the Cox WHI Annualized Mortality Rates and Change in %Censored Patients graphs have been added to this web version. Rates are shown as percent (with a decimal point) or per 100,000 (no decimal point).
Statistical calculations were coded and graphing was done in Appleworks6 (Apple) or Excel98 (Microsoft). 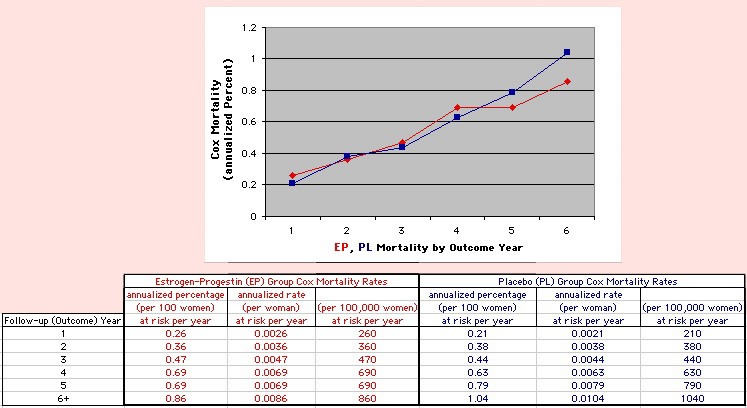 This analysis uses the Least Squares method, which finds the linefit that minimizes the sum of the squared vertical distances between the actual data(y) and predicted fit(Y) values over time. This is done for each study group. (See the discussion of statistics and D&T [13 p195]).

The EP-PL Difference is shaded in ltblue. The Difference in the Mortality Rate Fits is (110) in Year0, and decreases by (-39) each year, deaths per 100,000 women at risk per year. The Residuals of the Difference (Data minus Expected) are shaded in tan. Significance estimates for difference using the the Two-Sample Student T-Test and Probabilities is highlighted in yellow (or green if significant at 5%).

If two groups have the same mortality rates, then the OMRD Difference plot would be expected on average to have a zero Slope and a zero Intercept ( ltblue shading above). A decreasing slope is found, however. Again note the large Residual for Outcome Year4.


This analysis utilizes the DIFFERENCE, while the WHI reported the RATIO of the Hormone and Placebo Annualized Hazard Rates. Because event rates are low, ratio and difference plots versus time have the same shape. The Ratios of the WHI Cox Annualized Rates by Year (EP/PL in red) are plotted below with the published overall constant Hazard Ratio of HR=.98 (grey line).[1]

To compare our Least Squares Difference Fit to the published WHI Hazard Ratio (presuming a constant Hazard Ratio or zero difference slope), Least Squares Linefits to the Annual Cox Rates (LS) are calculated assuming equal rate-slopes. The Cox Mortality Rates Data Difference (orange line) and the Least Square Constant Difference Linefit obtained (brown line = constant = -27, zero slope obtained because of assumption of equal slopes) is shown at left. Note that the Residuals for the restricted Constant Difference (purple text, shaded in tan) are larger compared to the unrestricted LS Difference Linefit shown again at right below. They Residuals also do not appear randomly distributed about zero when comparing the Plots of the Residuals (shaded in tan).

The Least Square analysis is equivalent to a weighted mean of the data, and as such is dominated by any outliers (extreme data points). Note the the largest Residuals are in Year4 for EP and Year3 for PL. Techniques such as the Percent Trimmed Mean, Least Trimmed Squares (called Least Trim Squares here to help distinguish from the Trimmed Mean) and M-estimators can greatly improve the accuracy of the means and variances, particulary for the means.

A modification of the Least Trim Squares (LTS) method [17 p212] is shown here for illustration. The Least Trim Squares essentially removes the contribution of up to 50% of the points with greatest deviations from the Linefit. Here the greatest deviation in each group is excluded (data points in cream text with purple shading), and the Slope and Intercept differences calculated as for the Least Squares before. The LTS is excellent in many cases for improving the estimate of means (Slope and Intercept values). The improvement seen in the significance (SE and CI), however is not as great as indicated here, because the SE for the LTS is estimated using a non-rigorous method. The LTS Mean is more reliable than the untrimmed with this method for a wide range of distributions.

There is some change in the Intercept, but essentially no change in the Slope estimate with this Least Trim Square analysis. Note also the large Residual for Year4 (EP) and Year3 (PL).


To further explore the time dependence of the difference data, later years are excluded (truncated) to obtain fits from the first- 3, 4, 5, and all data years shown below. There is a more negative slope difference and more positive intercept difference as more years are included, both differences increasing in magnitude. [Note that a Trimmed Mean is used for the first- 4 year graph only (2nd from the left below) - see 4 Year Effect of Trim below].

The Slope of the Simple LS Linefit truncating the last 2 years (using the first four years left below) has a different sign (positive, not negative) than truncating the last 0, 1 or 3 years (using first 6, 5 or 3 years). Using the Trimmed Mean [17 p141], the Difference Slope and Intercept Residuals are improved (SE for the EP slope is dramatically decreased). This Trimmed fit is what is used for the last-2-year truncation in the multi-plot comparison above for better illustration, since this is highly dependent on the data point for Year 4 (right graph below and 2nd left above).

A table summarizing these modified fits is shown below. Although the Standard Error (SE) estimate for the Least Trim Square is not rigorously calculated, the Mean estimates are more reliable, and combining it with the Truncated Analysis provides a suggestion that Outcome Year4 (and perhaps Outcome Year3) differentially contributes errors to the SE beyond the expected random behavior, affecting the Mean Slope and Intercept values themselves less.

This leads to a search for possible explanations for the Outcome Year4 residual (affecting the EP and thus Difference and Ratio results).

Below is an illustration of the Censored patients in the Kaplan-Meier Mortality Analysis from the WHI E+P Study. Note that there is a discrete jump in the censored patients for both groups at Outcome Year4, exactly the Year that displays a large Residual for EP. Initial Outcome Years 1,2,3 have a change in censor rate of about 0% per year [(+/-)1% for the EP group and essentially 0% for placebo group]. Later Outcome Years 4 and beyond have a change in censor rate of about (+)15% per year.a Because Outcome Year4 is a transition between the two censor rates, a larger Variance(Residual) for the Censored Outcome might be obtained relative to the other years, with less effect on the value itself. (The %changes data has been added for this Web version. Further results pertaining to the Censored patients will be added as soon as possible.)

Recruiting/Exposure not Coincident with Outcomes for Survival Analysis

Analysis of Survival is different from a true experiment in many ways. One is that Exposure is started at different times. Also Exposures and Outcomes are separated in time, with unequal time intervals.

The Outcomes Groups in the Cox Analysis are made by combining the different chronological years that correspond to the same Outcome Year (Kaplan-Meier is different in this regard). Below is an illustration of this using the color scheme from the last graph.

Events that have a non-uniform effect on recruiting, exposure, outcome diagnosis, or censoring over the time course of the study that can have anomalous effects on the outcome rates and comparisons of rates, if they differentially affect one group only.

Two identified events in the WHI are 1) the switching of patients from the Estrogen Only Study into the Combined Estrogen-Progestin Study in 1996 (patient hormone treatments were changed from E to E+P when this was done and patients included in the E+P Group for Outcome results), and 2) the announcement of increased risks in the Prempro Group in 2000. These moments are indicated on the recruiting graph above and in the general Timeline of the Study below. Further discussion of this will be added as soon as possible.

Mortality is an extremely important clinical Outcome with a very clear clinical endpoint compared to other Outcomes. This paper examines the Annualized Cox Mortality Outcome data from the WHI (JAMA, July 17, 2002 [1]) over time. The individual patient data has not been released by the study yet (10/2004).

The WHI study was publicized as a "carefully designed hormone study" concluding that continuous oral Estrogen/Progestin Hormone Treatment (Prempro CEE.625/MPA2.5) "should not be initiated or continued for primary prevention" of Coronary Heart Disease.

However, numerous problems in the study, such as high treatment crossover and dropout rates, have clouded the Outcome results, which conflict with other studies.[7,9] It can be argued that although the selection of exposure group was randomized, the actual exposure to hormone itself was not well controlled.

Many publications, societies and government agencies have echoed the conclusions of the study without examining the study shortcomings.[10,11,12] This paper is an attempt to look at the conclusions about Mortality.

Analysis of Survival Data requires a compound outcome to deal with the problems of analyzing the data before all events have actually happened. Ideally, one would wait until all patients die to do the analysis, which is not practical. So time and events get lumped together as one Outcome Statistic (events per time to event for the Hazard Function, or some variable like person-years). An early or late timing of diagnosis for the same number of events can have the same effect as a change in the number events at the same timing.

Unfortunately, "little information is available to guide investigators in deciding which statistical analysis is appropriate for any given application of Survival Analysis, and research on biostatistical methods for analyzing survival data is still underway." [13 p224]


STUDY FACTORS THAT AFFECT THE ACCURACY OF THE WHI STUDY


USE OF THE STUDENT T-TEST FOR RATE DATA

A Two-Sample Independent Groups T-Test can be used to ask whether the means of two groups are equal when observations are numerical (continuous or means, ratios or proportions). [13 p133] Provided that the exposure risk is randomized, the Two-Sample T-Test is a valid approximation to the exact randomization experiment, free of the random sampling assumption or the assumption of exact normality. [14 p95]

Limitations of the T-test for significance of means relates primarily to missing an actual difference (beta error, low power =1-beta) rather than finding a difference when there is none (alpha error), particularly if the distributions have the same shape. [16;17 p107,120;18]


STATISTICAL FACTORS THAT AFFECT THE ACCURACY OF THE STUDENT T-TEST

Assumptions for the least squares fit (p197, 201)
•y is normally distributed about its expected value Y
•the expected values Y form a straight line
•the expected values Y are independent
•Variance of y is constant for every x
•ybar (the mean of sample y's) = µ (mean of the population distribution)
•regression is a robust procedure and may be used in many situations in which the assumptions are not met, as long as the measurements are fairly reliable and the correct regression model is used
•if regression equations are calculated blindly without examining plots of the data, investigators can miss very strong but nonlinear relationships


One-Sample T-Test for Slope and Intercept (p196-201, 238)
want to perform a separate statistical test on slope and intercept obtained from Least Square Linefit
The T-Test can be used to determine whether Least Square regression coefficients are non-zero and to form confidence intervals, using the Standard Estimate of the Error (SE)
SE = Sqrt(SUM[(y-ybar)2/(n-2)]) = (Standard Deviation=SD)/Sqrt(n)
b0 = expected Intercept (= 0 for zero Intercept)
•T(Intercept) = {a-b0} / {SE*Sqrt[(1/n)+[xbar2/SUM(x-xbar)2]}
denominator of this = SE(Int) = Standard Error of the Intercept
•T(Slope) = SE2/[SUM(x-xbar)2]

Special Thanks
to Rand R. Wilcox for his generous expert opinions about the Least Trimmed Squares and Bootstrap statistical techniques.

This poster is Dedicated in Memory of
Peg Harris, Ruth Howard and Helen Kolesnik Bilash